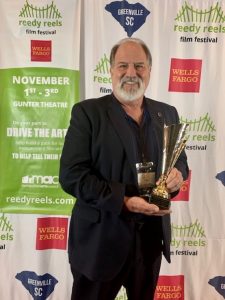 FORCE BLUE Co-Founder and Chief Operating Officer was on hand for the festival, which showcased more than 60 films, including 13 short films devoted exclusively to wildlife conservation.

“Out of all the amazing films at Reedy Reels, for ours to have been selected by the audience as their favorite is quite an honor,” said Sahm.  The love people have, not only our marine environment, but for our veterans was on display in the sheer number of folks who approached me after the screening wanting to learn more.